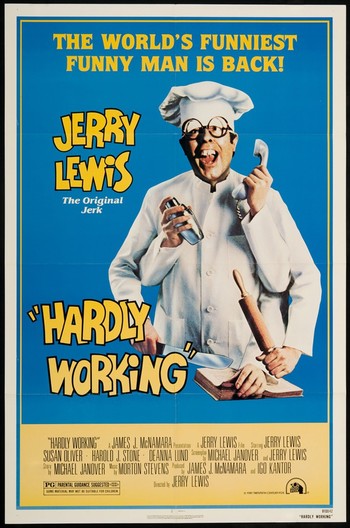 A 1980 comedy film, billed as Jerry Lewis's big comeback movie after a decade away from the silver screen (the unreleased The Day the Clown Cried notwithstanding). Lewis plays Bo Hooper, a clown who suddenly finds himself out of a job after his circus goes out of business. With the other circuses not hiring anyone for the better part of six months, Bo is forced to move in with his sister (Susan Oliver) and brother-in-law (Roger C. Carmel) and find another job to tide him over until he can go back to full-time clowning. Thanks to his chronic clumsiness, however, Hilarity Ensues.

The film was a big hit in Europe and had more than made its budget back by the time it got a stateside release in mid-1981... which was just as well, considering it ended up being released as a butchered re-edit and bombed with critics. It did do well at the box office and especially in the growing VHS market, however, and is now considered something of a Cult Classic, even if Lewis himself wasn't too proud of the end result.

For the unrelated webseries, see here.