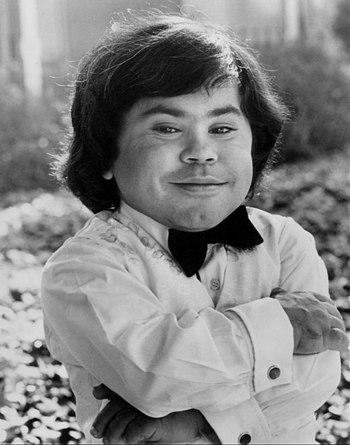 He is best remembered for his roles as Scaramanga's henchman Nick Nack in the James Bond film The Man with the Golden Gun and as Tattoo on the TV show Fantasy Island alongside Ricardo Montalbán. He was born with dwarfism, which led to a career of playing characters who were short in stature. Although he had steady work for six years on Fantasy Island, that came to an end when he demanded to be paid as much as his co-star Ricardo Montalbán. In his later years, he could be seen Adam Westing on The Larry Sanders Show and The Ben Stiller Show.

By the time he was 50, Villechaize was suffering from chronic health problems due to oversized internal organs putting pressure on his small body. This led to him becoming depressed, and he ultimately committed suicide by gunshot.

He's been portrayed by Peter Dinklage in the HBO film My Dinner with Hervé.