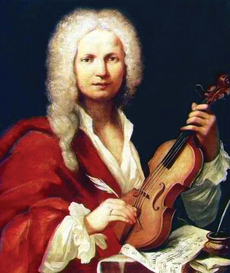 He was considered a master of the Baroque concerto form, and is perhaps best known for a set of four violin concertos called the Four Seasons. He also wrote a lot of sacred music, operas, and cantatas.

Vivaldi began his career as a Catholic priest and a tutor of music in a school for girls in Venice. He was referred to as 'The Red Priest' for his red hair. He was excused from celebrating Mass because of a "tightness of the chest", of which he complained his entire life. This left him free to devote his time to music.

Was very popular in his native Venice as well as elsewhere in Europe during much of his career, but changing musical tastes left him behind, and he died poor. Like many pre-Classical era composers, he fell into relative obscurity by the 19th century. But his popularity went through a revival in the early 20th century, helped along by, among others, Ezra Pound, as well as by the discovery in a monastery of music previously thought lost.

Bach thought highly of him, and transcribed some Vivaldi works to other instruments (i.e., turning some of Vivaldi's violin concertos into pieces for organ or harpsichord).