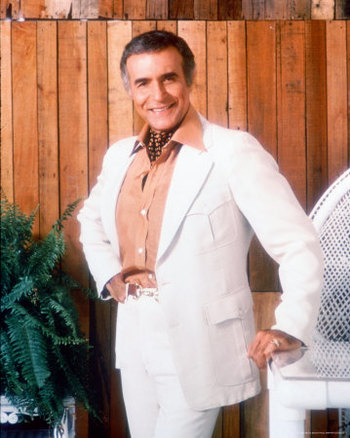 "Ask not what the role can do for you; ask what you can do for the role."
Advertisement:

Dividing his time between America and Mexico in The '40s, he became a major film star in Mexico, and found steady work in Hollywood, usually playing Latin Lover roles, as well as providing an English dub for various foreign films. In later years he was a familiar face as a prolific character actor, then finally achieved stardom in America in the 1970s alongside Hervé Villechaize, when Fantasy Island became a hit. He was also known as one of the best villains to ever grace the Star Trek franchise, Khan Noonien Singh, from the original episode "Space Seed" and his reprisal of the role in what's widely considered the finest of the original series films, Star Trek II: The Wrath of Khan. He also had a key role in another science fiction franchise of the day, Planet of the Apes, playing the kindly circus manager Armando in Escape from the Planet of the Apes and Conquest of the Planet of the Apes. Younger tropers are most likely to remember him as Grandfather Valentin in Spy Kids 2: Island of Lost Dreams and Spy Kids 3-D: Game Over, or as the voice of recurring Freakazoid! and Kim Possible villains Armondo Guitierrez and Señor Senior Sr., respectively.

Was a commercial spokesperson for Chrysler in the 1970s and '80s, which is where the (oft-repeated) catchphrase "rich Corinthian leather" comes from.

A longtime advocate for the Latino community in Hollywood, he started his own foundation, which purchased and restored the historic Vine Street Theatre in Hollywood (now called the Ricardo Montalbán Theatre).