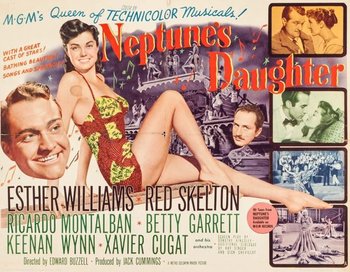 Neptune's Daughter, released in 1949 and directed by Edward Buzzell, was the most popular of all the "aquamusicals" that Esther Williams starred in for Metro-Goldwyn-Mayer.

Eve Barrett (Williams) is a champion swimmer who shares a Los Angeles apartment with her sister Betty (Betty Garrett). She's also a successful businesswoman, running a swimsuit company with Joe Backett (Keenan Wynn), who harbors an unrequited crush on her.

Both sisters perk up at the news that a South American polo team is coming to LA for a big match: Eve because she can stage a swimsuit exhibition alongside the event, Betty because it gives her a chance to hook up with a hunky Latino polo player.

Betty shows up at the country club where the polo team in staying and meets a man who she thinks is Jose O'Rourke, the dashing captain of the South American team. It's actually Jack Spratt (Red Skelton), the club's dorky masseur. Jack, thrilled to get any attention from a woman, plays along. Meanwhile, the real Jose O'Rourke (Ricardo Montalbán) visits the swimsuit company and becomes smitten with Eve. After Betty brags about her romance with "Jose", Eve decides to date him, just to keep him away from her sister. But some gamblers eager to throw the match also have eyes on Jose.

Hilarity Ensues. As does swimming. And polo.