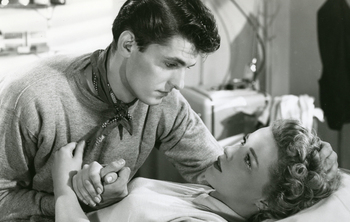 The film follows dancing duo Carol Williams (Forrest) and Guy Richards (Brasselle) who, after spending years scrapping by and working themselves to the bone, are finally on the road to stardom and plan to marry, too.

Tragedy strikes, however, when Carol contracts polio. Guy is supportive, but Carol is understandably devastated.

Even with all her negativity, Guy does everything he can to help with her recovery. Carol, on the other hand, has hit a mental brick wall; she's not sure if she ever wants to get well. This sudden change causes her to lash out at Guy and their life together seems uncertain.

At this time in history, polio was the number one communicative disease in the United States

, causing permanent paralysis and death for thousands of children and adults.This film was not only topical but also biographical: Ida Lupino contracted polio at sixteen as an up-and-coming actor which not only informed her screenplay but added another layer of reality to it.

Since 1994, Polio is currently one of the few eradicated diseases in the Western Hemisphere. Although it does live on in other parts of the world, it has been increasingly reduced due to vaccination.