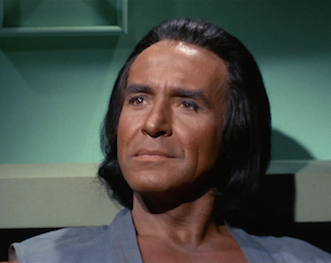 Tortures people who won't give him what he wants.
Lt. McGivers: I don't know if you'll like living in our time.
Khan: Then I'll have to remold it to my liking.
Advertisement:

The episode which was the basis for Star Trek II: The Wrath of Khan.

It all begins when the Enterprise comes across the S.S. Botany Bay, an apparent derelict from the 1990s, which the characters handily remind each other was when Earth was nearly destroyed in a world-wide war which was not World War III. This war was caused by scientists creating genetically-superior humans. These superhumans decided to Take Over the World, but ultimately ended up fighting amongst themselves.

Kirk, Bones, Scotty and Lt. Marla McGivers (Madlyn Rhue, our Girl of the Week) beam onto the Botany Bay, finding it full of Human Popsicles. Ricardo Montalbán, who we're told is Indian, wakes up and McGivers falls in Love at First Sight. In Sickbay, he's discovered to be superhuman, holds a knife to McCoy's throat and says his name is "Khan", but refuses to answer any other question. Kirk decides it's a good idea to let Khan look at all the technical information on the Enterprise. Meanwhile, McGivers gets to have a rather lame love scene with Khan in which we learn she wears her hair in a 1960s updo (which looks uncannily like a wig) because it's "comfortable."

Kirk and Spock question Khan some more and he as good as admits that he was one of the superhuman Evil Overlords from the '90s. Since Evil Is Sexy, McGivers takes Khan's side and apologizes to him for how rude everyone else was. He then manipulates her feeble female mind into agreeing to help him hijack the ship. With her help, he unfreezes his Evil Minions and takes over Engineering. It turns out he actually learned a bit from those tech manuals and cuts off life-support systems to the bridge. After everyone has passed out, he treats them to Kirk's torture in a decompression chamber, offering to let him live if someone joins him.

At this point, McGivers has had enough and sets Kirk free, begging him to let Khan live. This leads to Kirk and Khan's Stunt Doubles having a big Professional Wrestling-style fight which ends in Khan's defeat despite his superior strength due to Kirk breaking off a mechanical lever from the ship as an Improvised Weapon. Kirk and Khan agree that he and his followers will be dumped on the savage planet Ceti Alpha V, providing Khan the opportunity to build his own empire. McGivers decides to go with Khan rather than face court-martial. Kirk and Spock speculate about what will become of them:

Advertisement:
Spock: It would be interesting, Captain, to return to that world in a hundred years and learn what crop had sprung from the seed you planted today.
Kirk: Yes, Mr. Spock. It would indeed.

We're sure that leaving them behind will in no way come back to bite the crew later on...

The Fan Nickname for this episode is, of course, "The One With… Khan".