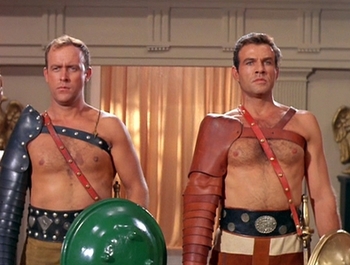 After coming across the wreckage of the S. S. Beagle, Kirk, Spock and Bones beam down to the surface of the nearest planet. This planet is a class M planet remarkably like Earth down to the land/water ratio. Atmosphere and radio signals hint a technological advancement equal to 20th century Earth. They beam down to a part of the wilderness close to city limits, thinking it deserted when they're taken captive by slaves on the run. After Kirk impresses them with his communicator, they take him in and tell him about the Empire. Apparently, they get very angry when slaves worship a different god. Kirk and company gather the runaway slaves to be "sun" worshipers. It seems the civilization on this planet is a reflection of a modern day Earth where Rome never fell.

When Kirk and company are captured and taken to the city, they find out what happened to the crew of the Beagle. It seems not all captains are that dedicated to their crew. When Merik was offered a life of luxury as First Citizen in return for selling out his entire crew to fight in the gladiator pits, he couldn't resist.

The Fan Nickname for this episode is "The One with the Space Romans".