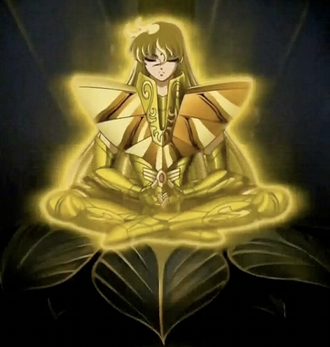 Lots of Hot-Blooded heroes like to power up by doing something violent. Whether it's Punctuated! For! Emphasis! while yelling their In the Name of the Moon speech, tearing off a Power Limiter, shouting as they charge up a Ki Manipulation, flexing as they invoke the Dangerous Forbidden Technique, or even bleeding. Not this guy though; he expresses his enhanced combat ability by entering the Yoga Lotus Position or any similar seated posture.

Rather than express violence with violence, he pauses mid-battle (or pre-battle) and meditates. It doesn't have to be a twenty-minute session; usually, all he needs is five seconds, closed eyes, even breathing, mentioning a Survival Mantra or Koan to enter a state of near-perfect calm (or murderous Tranquil Fury), and then the bad people fall down.

In video, this usually comes accompanied by a sudden hush of whatever ambient sounds there might be (whether cheering crowds or noisy explosions). You can bet their opponent will be really confused and probably insulted worse than if their honor had been Trash Talked. Cue a "surprise attack" at this obviously helpless target which will result in a blocked or even reflected attack.

This is usually used by those with Enlightenment Superpowers like the Warrior Monk, Kung-Fu Wizard, and many Psychics. In Video Games, this may manifest as a form of Charged Attack which is also invulnerable.