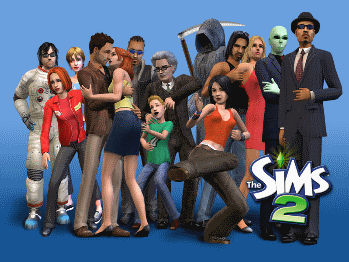 Where did the alien get a suit?
Advertisement:

The Sims 2 is the second standalone game in The Sims series, released in 2004, with a total of eight expansion packs.

In contrast to The Sims, the game introduced three interconnected concepts: aging, Wants and Fears, and Aspiration. Sims now age through various stages—infant, toddler, child, teen, adult, elder —and could be created in any stage except the first. (College-aged Young Adults were added in the first expansion pack, University.)

They also came with an "Aspiration," an overall goal for their life: Family, Romance, Wealth, Popularity, Knowledge, and (eventually) Pleasure. Starting with the first expansion pack, this would assign the Sim a (randomly-generated) Lifetime Wish, which keeps them happy for the rest of their lives if they achieved it.

In the meanwhile, it also controlled what Wants and Fears would pop up; these were general life events, from "Have First Kiss" to "Eat Trademark Favorite Food". These would contribute not only to a Lifetime Aspiration Score, which could be used to purchase various loosely realistic in-game objects (the most basic of which being a literal Money Tree), but also to the Sim's real-time Aspiration meter. This corresponded roughly to self-esteem or general mood, and could override a Sim's physical-needs total if it was high enough. Of course, it also lost XXX points every few hours, and if it hit bottom the Sim would have a Heroic BSoD (Played for Laughs).

Fulfilling the Sim's lifetime wish would fill their Aspiration bar to the max for the rest of their lives, but (of course) you get a certain amount of time to do this before they croak. Meanwhile, personalities continued to be calculated on the five scales/star sign model, but gradually more features were added through expansion packs, such as the ability to gain or lose personality points under certain circumstances and the introduction of memories, turn-ons, turn-offs, attraction/chemistry, interests and hobbies.

The expansion packs were named University, Nightlife, Open For Business, Pets, Seasons, Bon Voyage, Free Time and Apartment Life. The next sequel, The Sims 3, was released in 2009.

A package including all the expansions and stuff packs, The Sims 2: Ultimate Collection, was offered to Origin users who had registered The Sims 2 on July 15, 2014 under the pretense that their current version of the game would lose support on July 22 and that the Ultimate Edition would be the only supported version. The offer was extended to all Origin users from July 23 to 31, where redeeming the product code I-LOVE-THE-SIMS would add Ultimate Edition to their game library. While the offer ended on August 1, 2014, the package could still be obtained long after that date by contacting EA customer support and providing a physical copy of a Sims 2 product, but EA put a stop on that on October 11, 2018.

The Sims 2 provides examples of: