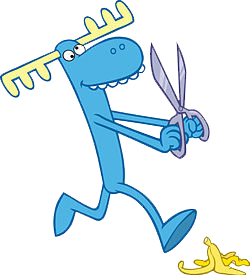 One of the basic safety rules we learn as children is "never run with scissors." Thus, references to this rule and instances of characters running with scissors show up in the media all the time.

Do Not Try This at Home, obviously. Please. Related to Shear Menace, which is using scissors as a weapon.