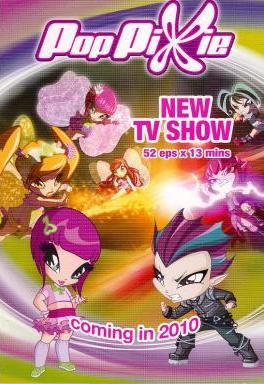 PopPixie is a Short-Lived miniseries featuring Super-Deformed pixie characters. These pixies were first seen in Season 2 of Winx Club, but aside from that, there's no relation to Winx. It's been called a Spin-Off of Winx Club by some, but it was not advertised as one. The show is set in the village of Pixieville, where pixies, gnomes, elves, and talking animals go about their daily lives. In the city's center is the Tree of Life, which grows "Magic Pops." When a pixie uses his or her powers for goodness, he or she may be given a Pop and become a "PopPixie."

The show is aimed at a much younger set compared to Winx Club and never really caught on. While the pixies were somewhat popular with younger fans, PopPixie was never meant to be anything more than a limited series. Its only season aired for two months in Italy and no followup episodes were made.

Not to be confused with Pixie Pop.