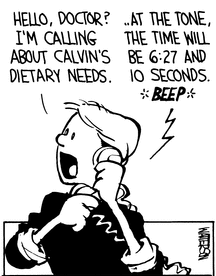 Your doctor says you should lie down all evening.
Scratch: Eh, just do what I do. You create a fake portal and you pretend the Ghost Council's callin' ya. Works all the time.
Molly: Wait, you fake those!?
Scratch: Uhh... never with you.
— The Ghost and Molly McGee
Advertisement:

Bob wants to trick Alice into thinking that he is talking over the phone to Charlie when he really isn't. Often a Comedy Trope, and as such it almost never succeeds. Alice usually finds out the truth immediately and tends to misinterpret it.

Talking to someone else

Talking after hanging up

Talking to an automated system

Regardless of variety, all four attempts can fail if:

Do not confuse with a Prank Call. Compare Escape Call, where Bob deliberately arranges earlier for Charlie to call him so that he can get out of talking to Alice. Subtrope of Looking Busy. See also Phoning the Phantom, where somebody communicates with someone nobody else can hear by pretending to be on the phone with them.

open/close all folders
Talking to nobody

Talking to someone else

Talking after hanging up

Talking to an automated system