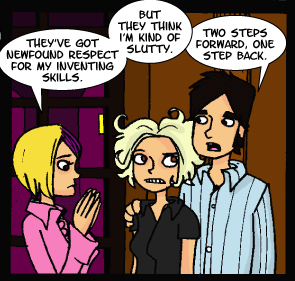 Amy, Riley, and Tim. The female inventors' judgement is unkind, but understandable.
"You can't be arrested for things that are too weird for there to be laws about!"
Advertisement:

John Allison's followup to Bobbins, using most of the same characters and the same setting—only this time around Tackleford isn't just a charmingly eccentric British village, but one overrun with mad scientists, Satan worshippers, robots, elves, minotaurs and devil bears. The locals either fail to notice the madness, or take it all in their stride.

The lead is once again Shelley Winters—no, not the redoubtable Oscar-winning actress, but the cute, ever-chipper redheaded sometimes-reporter who has an insatiable drive to investigate odd goings-on, to restore justice and order where she senses it is lacking, and apparently to die gruesome, though temporary, deaths. It also features Amy Chilton, Shelley's merrily self-involved co-adventurer; the misfortune-laden but unflappable Ryan Beckwith; Tim Jones, brilliant inventor and accidental mayor; sassy goth girl Esther De Groot and her naive boyfriend The Boy; Fallon Young, sexy spy of questionable competence; Rachel Dukakis-Monteforte, bitchy college student turned Satan's minion; and Raffles, the Gentleman Thief.

After a little over seven years, the comic finally came to an end on September 11, 2009, with a new series called Bad Machinery following on the 21st; it takes place three years after SGR's ending. Then, in November 2014, Allison announced the end of Bad Machinery, and reverted to "Scary Go Round" as an umbrella title for subsequent strips, at least until his specific plans were finalized. Another spinoff was Giant Days, featuring the university adventures of Esther, which had three issues self-published by Allison, and a later series illustrated by Lissa Treiman for the Boom! Box imprint.

and around the site, where she appears to be an actress whom Allison pays to star in his comics. It's all a little confusing. She's also now back in new Bobbins comics appearing occasionally in between Bad Machinery strips, showing Bobbins and SGR characters as they are in the present day. In addition, another filler sequence with its own title, Expecting to Fly, ran in late 2014 after the final Bad Machinery story; this showed some of the cast (including Shelley) as they were in 1996, in a school-based story.

As of 2022, the comic is only available in its collected form as several PDFs available for purchase from John Allison's Gumroad

See Bobbinsverse for the page on The 'Verse as a whole. See here for The Verse's Character Page

Scary Go Round provides examples of: