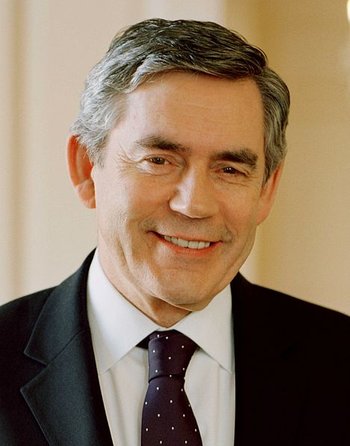 James Gordon Brown (born 20 February 1951) is a British politician who was the Prime Minister of the United Kingdom and the Leader of the Labour Party from 2007 to 2010. He previously served as Chancellor of the Exchequer in the Blair Government from 1997 to 2007, which made Brown the pair of hands at the controls of the British economy. Then he became Prime Minister.note The change of power roughly mirrored Margaret Thatcher's hand-off to John Major in 1990, only Brown didn't get "elected" PM.

In this age of media, poor Gordon had a major disadvantage: he was boring. There is no way around this. Being boring, dull, and careful are virtues for a Chancellor but a handicap for a head of government, whose popularity, especially in the media, fell to remarkable lows. At the 2009 D-Day memorial celebrations, a small group of British veterans clapped politely for Angela Merkel, Chancellor of Germany, then booed as Gordon Brown began his speech, demanding to know where HM The Queen was. The media claimed at the time that Downing Street had asked Nicolas Sarkozy, the president of France, not to invite the Queen so that Brown could get in more photo opportunities with the US president Barack Obama. However, the same veterans gave the prime minister's speech a standing ovation and later insisted the booing was "jokey" — they later sang "Why are we waiting?" at the French prime minister, François Fillon, because they were forced to stand in the rain.

Constant comparison to two kings of spin, David Cameron and Tony Blair, did not help, and his attempt to compete with them in the 2010 election became infamous for his painful un-smile and clear discomfort in front of a camera.note Ironically, he had been one of the most visible senior members of Labour's big wins in 1997, 2001, and 2005. He also struggled with a reputation of having been after Blair's job; his rivalry with Blair was heavily played up in the media.note Brown apparently

agreed not to bid for Labour's leadership in 1994 to make it easier for Blair to become leader and oversee its metamorphosis into the centrist "New Labour", which they both wanted. In exchange, Brown would get considerable policy sway in a then-hypothetical Blair government. Brown has always been an extremely private man — some have since attributed this trait to possible symptoms of Asperger's syndrome, but it worked against him, since it let the press project whatever image they wanted onto him without any blowback.

He holds a doctorate in history from Edinburgh University. Gordon Brown has the distinction of being only the fifth prime minster to have attended a university other than Oxford or Cambridge (along with the Earl of Bute, The Viscount Palmerston, Lord John Russell and Neville Chamberlain), and the third to have attended Edinburgh (after Palmerston and Russell, although Russell didn't graduate; another eleven prime ministers never went to university).

He was blinded in his left eye after a rugby accident in his youth and later discovered that he has two small tears in his right eye from a tennis accident just a few years later, but they are not serious enough to require surgery.

Shortly after replacing Tony Blair as prime minister — the latter had stood down and left Parliament to boot — the media and some ministers began speculating about the possibility of an election being called. When Brown finally announced there would be no election, it was after weeks of media hype and several poor polls and by-election results, leading to the media image that he was indecisive and a "bottler". Labour's reputation never recovered and political writers have described Gordon Brown's delayed response to the speculation as the biggest political mistake of his career. Although Blair had benefited from the Conservatives choosing three successive unappealing leaders (William Hague, Iain Duncan Smith, and Michael Howard) in opposition, Brown found himself up against David Cameron, a man 15 years younger and with a lot more media savvy, whose reputation had been climbing in the polls and media since before Blair stepped down as prime minister. Rumours of bullying, smear campaigns, an addiction to anti-depressants, and a rejection of claims made by the media and Conservatives that he had a role in the ongoing global financial crisis, alienated the media that Blair had carefully courted and, inevitably, the British public as well.

He eventually served as prime minister for almost three years, until 11 May 2010, finishing the term that Tony Blair had won in 2005. The general election on the previous Thursday, 6 May, had resulted in no party gaining overall control of the House of Commons for the first time since February 1974, leaving the Liberal Democrats holding the balance of power and the Conservatives with most votes and seats. It followed a campaign wherein Brown was overheard on a microphone during a campaign stop in Greater Manchester calling a local senior citizen and avowed "used to be Labour" supporter named Gillian Duffy "bigoted". While she had badgered him, repeatedly asking, "Where are all these Eastern Europeans flocking from?" and being viewed by most of the public as indeed bigoted, his reaction was a media gift: he backed down, said she wasn't a bigot and that he'd misunderstood her words. His team were robbed of the chance to defend him against the media, and the British public viewed that as yet another example of his mistakes.

Brown stayed on waiting to see there would be a Conservative-Liberal Democrat deal, as per the rules of British elections, which state that until a new PM is declared the last one must stay in office no matter how badly they lost. A Labour-Lib Dem agreement looked briefly possible when Brown stepped down as Labour leader, but the parliamentary arithmetic (which would have needed Scottish National Party, Plaid Cymru, and Social Democratic and Labour Partynote What's called simply the "Labour Party" organises in Northern Ireland as such, but the SDLP is the equivalent party in Northern Ireland that actually fields candidates for elections. support for an overall majority) never really added up; nor did Labour have a clear leader to direct the negotiations with the Lib Dems, which also reportedly damaged their chances. (The Lib Dems were mainly using the possibility of an agreement with Labour to extract concessions from the Conservatives anyway, according to the journalist Andrew Rawnsley. None of the three parties got quite enough seats to create the scenario the Lib Dems really wanted, which was to be a single kingmaker between Labour and the Conservatives and force both to make concessions to them to secure power.) He resigned and was succeeded by David Cameron, ending 13 years of Labour rule and making him the first prime minister who had never led their party to electoral victory since James Callaghan three decades before. He did serve his personal mandate as MP for Kirkcaldy & Cowdenbeath,note He had previously represented Dunfermline, East from 1983 until 2005, for the duration of its existence. and retired from Parliament effective at the 2015 election.

In a gaffe of Al Gore proportions, he once accidentally stated "we saved the world"

More recently, some people have credited him with saving the United Kingdom: During the final days before the 2014 Scottish independence referendum, the "No" campaign got his motor running again and he delivered a widely-praised barnstorming speech

. The "Remain" campaign in the referendum on continued UK membership of The European Union attempted the same tactic two years later, but they did not succeed. Ironically, as PM Brown had reneged on a Labour manifesto commitment to call a referendum on passage of the Treaty of Lisbon, forcing it through Parliament and thus ratifying it and allowing it to come into force. By the time the Conservatives (who also supported a referendum under Cameron) were elected in 2010, it was too late to reverse it. Why is this ironic? Because the Treaty of Lisbon contained a provision (Article 50) allowing for any member state to withdraw from the EU — a provision that had never existed before.note A fundamental principle of the EU is ever-closer union, and many commentators describe it as a shark: it must keep moving forward (i.e. integrate) to survive. Joining the EU is and was generally intended to be irreversible. Had the referendum taken place and "No" won the daynote This was seen as a Foregone Conclusion; every poll showed the UK electorate overwhelmingly rejected it, which is why it was never put to a public vote, since the Labour government supported its passage. the treaty would not have come into forcenote All EU treaties and amendments thereto must be ratified by every member state before they can come into force. and the UK might not have even been able to leave the EU, even if the government wanted it to.

Otherwise, Brown's policy vis-à-vis the EU is generally well-regarded, though more for his tenure as Chancellor than as PM: the British economy showed itself to be a poor fit for the euro and opted to stick with the pound, which was all down to five economic tests

that Brown and his then-adviser Ed Balls devised (which separate Treasury analyses in 1997 and 2003 determined the euro failed). This was during a time when the UK was criticised for lobbing a wrench into the European project. Doesn't look like such a bad call in hindsight. Even his decision not to call an early election as PM in 2007 has been revisited, after Theresa May became PM in similar circumstances to Brown in 2016, did call a snap election after less than a year, and campaigned so poorly her party lost its majority. Nowadays his reputation leans towards that of a competent but flawed politician who happened to take power at the worst possible moment.

He is still living, but apart from his participation in referendum campaigns, his post-premiership has been relatively quiet, making him perhaps the most anonymous former PM since his fellow Scot Alec Douglas-Home.