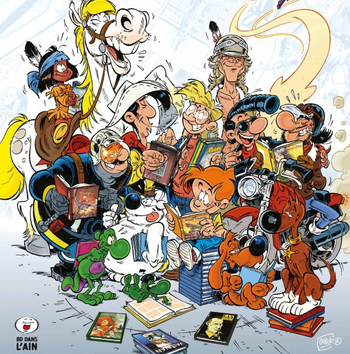 Among European comics, comic book series made primarily in France and Belgium — also known as BD, from their French name bande dessinée ("drawn strip") — are a huge industry by themselves (3rd largest in the world, after U.S. Comic Books and Japanese Manga) and have produced many great classics. They are also quite distinct from their American and Japanese counterparts (though cultural co-mingling has reduced those a bit, especially concerning manga; their extremely high popularity since the early '90s has forced the industry to adapt a bit to survive).

First, the mainstream and intellectual perception of the medium is in stark contrast to that of the U.S.; in Europe, comics are called "le Neuvième Art", the Ninth Art. The influence of French-language comics in Europe has spread this concept to other national comics industries, such as those of Great Britain, Spain and Italy (and South America and Africa, to a lesser degree), to a noticeable extent. The lack of any truly constraining Comics Code or puritan Moral Guardian-enforced laws allowed creators and publishers to use more mature themes and concepts in their works, and to later move away from purely children's stories to more adult-oriented works in the The '60s virtually seamlessly (the fact that it was a more permissive time than The '50s probably helped). While youth-oriented comics are still a major part of the industry, many are perennial Long-Runners and/or are rife with Parental Bonus, and there is little to no social stigma attached to being a fan or a collector. In fact, it is almost impossible to find a house in France or in Belgium that doesn't have a bunch of comics on a shelf somewhere.

The publishing methods and format is distinct from that in the U.S. Volumes, called "albums", are usually at A4 size (21cm x 30cmnote  or if you want to be pedantic, 210 x 297 mm, the slightly-larger European equivalent of "letter-sized" 8.5'' x 11'' paper), hardbound and normally between 40 and 60 pages long. New albums in a series typically appear at a rate of one per year. Really prolific series can go up to three or four albums a year. However, it isn't unheard of for some authors (especially those who are prone to a Cast of Snowflakes and/or Scenery Porn) to need several years for a new album. This rarely seems to put off fans of a series.

Like manga, many titles are first pre-published piece by piece in the publisher's comics magazine, mostly those aimed at children and teens. In those, one-page funnies blur the lines between comic books and Newspaper Comics.

Since the early 2000s and the boon in superhero films adapted from American comics, there have been multiple live action adaptations of Franco-Belgian comics on film, mostly produced in France. There have been more misses than hits at that, overall.

See also Belgian Comics, comics strictly made in Belgium, and containing comics from Flanders that don't fall under the Franco-Belgian tradition.

Please don't add a link unless you intend to actually write the corresponding entry.