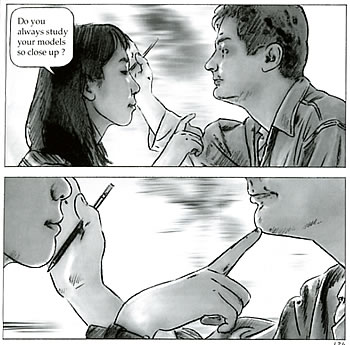 Boilet depicting himself in the company of one of his Japanese models.
Advertisement:

Frederic Boilet (born 16 January 1960) is a graphic novelist of the French-Belgian school whose stories are mostly about life in Japan as a Western expatriate. He himself has been living in Japan since 1990, and since then has been a "bridge builder" between the French-Belgian school and the world of Manga. He has in particular collaborated with Jiro Taniguchi, and been instrumental in the latter's introduction to the European market.

Boilet's girlfriend is a fellow graphic novelist, Aurelia Aurita (the Pen Name of Chenda Khun), a Sino-Khmer woman, who has related their steamy relationship in the sexually explicit Fraise et Chocolat. He makes no secret of his overt Asiaphilia.