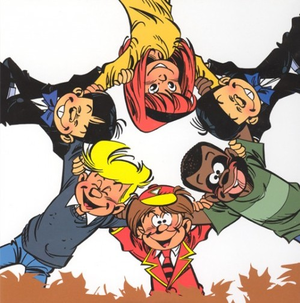 La Ribambelle ("Ribambelle" is a French word for "Flock") is a Belgian comic series created by Jean Roba in 1962. In Dutch this series was translated as De Sliert.

Inspired by The Rinkydinks, the series is centered of the adventures of a team of six kids: Phil (the leader), Dizzy (a black trumpetist), Archibald (a Scottish genius), Atchi and Atcha (Japanese twins, black belts in judo) and Grenadine (the girl). The only reoccurring adult is James, Archibald's butler, who can count as the seventh member of the team. Their main opponents are the Caimans, three little punks who want to make their lives miserable.

The series ended in 1975 because Roba had to focus on Boule et Bill.

In 2011, Zidrou and Jean-Marc Krings launched back the series.