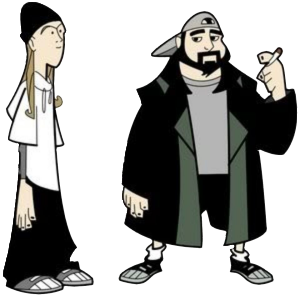 "Hello, pig. Hello, twig. It's like the number 10 just walked in."
— Mimi (to Drew and Lewis), The Drew Carey Show
Advertisement:

This is where a fat and a skinny character make up a two-character ensemble. This is usually a comedy trope, usually with the skinny character being the Straight Man, although inversions of this are seen as well. Sometimes both characters are silly and this is often seen in the Terrible Trio type of villains, although there are also examples of heroic, or at least not villainous, pairs who fit this description. They often fit into the tropes of Those Two Guys or Bumbling Henchmen Duo.

These two guys usually (but not always) have some specific characteristics that tropify their relationship: The fat one is usually a dopey optimist, while the skinny one is cynical and refined. This pair, even in villain form, are devoted to each other. The skinny one has all of the ideas, and the fat one is also the strong man. On the rare occasion the fat guy has a brilliant idea, either the skinny guy will express extreme surprise at the fat guy's ability to rub two brain cells together, or the idea will be waved away as unworkable and then re-appropriated two seconds later as the skinny guy's idea.

If these characteristics are not followed, then it's usually because the fat one is a brute who beats up the whiny skinny dude a lot.

Compare Big Guy, Little Guy, which is this trope with height as opposed to size. Often overlaps with Smart Jerk and Nice Moron. Sister trope to Big, Thin, Short Trio.

open/close all folders
Anime and Manga
Asian Animation
Advertisement:
Comic Books
Comic Strips
Eastern European Animation
Fan Works
Films — Animation
Films — Live-Action
Folklore
Literature
Live-Action TV
Music
Professional Wrestling
Radio
Theater
Video Games
Web Animation
Web Comics
Web Videos
Western Animation
Oggy and the Cockroaches: Dee Dee (fat) and Marky (skinny). Sometimes their roles can be switched, in episodes like "Ugly, dirty and good", "Wake up my lovely" and "The big, bad wolf", the former is the straight-man who comes up with a plan and Marky is the clumsy goofball or the follower. However in others like "Fly for fun" and "Mission Apoll Oggy" it's the polar opposite.
Real Life
Feedback

Bobby Worst is thin, Marissa Worst is fat. They're both evil and depraved.

Bobby Worst is thin, Marissa Worst is fat. They're both evil and depraved.