Film / A Cure for Pokeritis 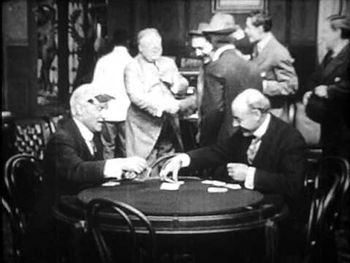 A Cure for Pokeritis is a 1912 comedy film, 12 minutes long, staring John Bunny and Flora Finch. Bunny plays George Brown, who loves to play poker with his buddies but keeps getting cleaned out. Finch is his wife Mary, who is highly disapproving. Mary browbeats George into giving up poker, but George's buddy has an idea. He sends George an invitation to a fake fraternal lodge that is really an excuse to get out of the house and play poker. Mary figures this out when George starts muttering in his sleep, and arranges a prank to cure George of his poker habit permanently. She arranges for her cousin Freddie Dewdrop and his friends to impersonate cops and pretend to raid the party. All the wives then show up to embarrass their husbands, but George and Mary share an affectionate embrace.

A Cure for Pokeritis frankly isn't all that funny from a modern perspective, but it is of interest as one of the few surviving films of Bunny and Finch, who were a very popular comedy duo. Possibly the first depiction of poker in film. It is listed on the National Film Registry.