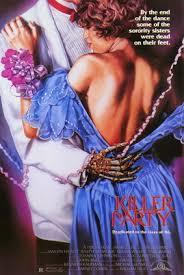 In order to join a sorority, three friends go to a hazing party in an old house where a sadistic bloodthirsty demonic spirit is lying in wait.