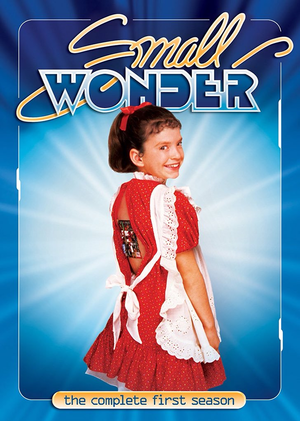 This Fantastic Comedy aired in First-Run Syndication from 1985 to 1989.

Ted Lawson, a robotic engineer, had a family like any other in California, except that his daughter, Vicki (or rather "VICI"note "Voice Input Child Identicant"), was a robot he designed and built. Ted, as well as his wife, Joan, and their son, Jamie, continually tried to keep Vicki's identity a secret. This was no easy task, since Ted lived next door to his gloryhound boss, whose daughter, Harriet, wanted to be Mrs. Jamie Lawson.

The series is derided by some for its silly premise and uneven episode plots, some of which some felt were downright uninspired. Due to popular demand, however, Shout! Factory released the first two seasons of Small Wonder on DVD in the first half of 2010. The series' star, Tiffany Brissette, has retired from acting to avoid typecasting. More information about the show is at the Semi-Official Small Wonder "Cabinet of Contents" Home Page

Tends to be confused with Out of This World (1987), which involves an alien girl who could freeze time and aired around the same time. The premise might sound familiar to fans of obscure 1960s sitcoms as Small Wonder was actually a remake of My Living Doll, a series produced in the 1960s by Small Wonder showrunner Howard Leeds. The big difference between the two shows is that whereas Vicki is a cute little girl, the titular Living Doll was played by Statuesque Stunner Julie Newmar.