Music / The Mamas & the Papas 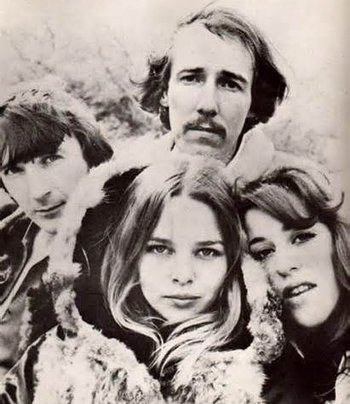 "All the leaves are brown...

"note From left to right: Denny Doherty, Michelle Phillips, John Phillips, Cass Elliot.
"John and Mitchy were gettin' kind of itchy
Just to leave the folk music behind
Zal and Denny workin' for a penny
Tryin' to get a fish on the line
In a coffee house Sebastian sat
And after every number they'd pass the hat
McGuinn and McGuire just a-gettin' higher
In L.A., you know where that's at
And no one's gettin' fat except Mama Cass!"
— "Creeque Alley"
Advertisement:

"Papa John" Philips also helped to organize the Monterey Pop Festival in 1967 along with record producer Lou Adler and Alan Pariser. This now-legendary festival provided huge career boosts for Jimi Hendrix, The Who, Ravi Shankar, Janis Joplin, and Otis Redding. (The Mamas & the Papas would end up being the closing act for the festival after The Beach Boys were unable to close as originally planned.)

Studio albums by the Mamas & the Papas:

"California Tropin' on such a winter's day":