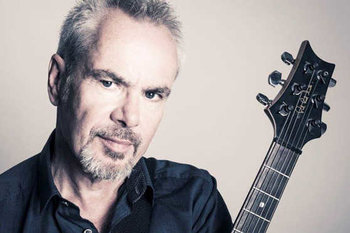 "Near a tree by a river there's a hole in the ground,
Where an old man of Aran goes around and around,
And his mind is a beacon in the veil of the night,
For a strange kind of fashion there's a wrong and a right,
But he'll never, never fight over you."
"The Riddle"
Advertisement:

Nicholas David "Nik" Kershaw (born 1 March 1958) is a British pop star mainly associated with The '80s, though he's still in the business today. He's also a gifted songwriter who's written for Chesney Hawkes and Let Loose and has worked on film soundtracks as well. He's released eight albums over his career:

No relation to Sammy Kershaw.