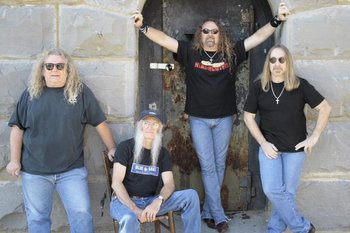 From left: Richard Young, Fred Young, Doug Phelps, Greg Martin. Photo by Brad U. Wheeler.
A Country Music and Southern Rock band which, as indicated by the name, hails from Kentucky.
Advertisement:

The band began in The '60s as Itchy Brother, which consisted of brothers Richard (rhythm guitar) and Fred Young (drums), along with their cousins Anthoney Kenney (bass) and Greg Martin (guitar). After some local success, they were almost signed to Swan Song Records, owned by Led Zeppelin drummer John Bonham, but the deal fell through when Bonham died.

After their initial breakup, the Young brothers and Martin created what would become The Kentucky Headhunters by adding brothers Ricky Lee (lead vocals) and Doug Phelps (bass) to the lineup. Some local radio support led to them creating a demo tape, which wound up being released by Mercury Records as their 1989 debut album Pickin' on Nashville. The album sold double-platinum, producing their most famous song "Dumas Walker" along with a successful cover of Don Gibson's "Oh Lonesome Me". After an unsuccessful second album called Electric Barnyard, the Phelps brothers both quit to form Brother Phelps, a more mainstream country duo. At this point, Kenney returned, and Mark S. Orr took over on lead vocals. The first album with Orr, Rave On!! was a commercial and critical flop, as was a collaborative album with Chuck Berry's pianist Johnnie Johnson. After a Greatest Hits Album, they ended up leaving Mercury.

Orr quit in the mid-1990s, causing Doug to break up Brother Phelps and rejoin the Headhunters, this time as lead singer. The group did a single album for BNA Records in 1997, which was launched by a commercially unsuccesful cover of "Singin' the Blues". Further albums in the 21st century pushed the band's sound beyond its Southern rock roots, with several bluegrass-flavored tracks on Songs from the Grass String Ranch in 2000, and several soul and blues influences on Soul in 2003. An independent label released the covers album Big Boss Man in 2005, followed by a second greatest-hits package in 2007. Mercury released a live album in 2009 to honor the 20th anniversary of Pickin' on Nashville, right as Kenney quit the group and Doug once again became bassist. Later albums have also pushed for the occasional lead vocal from Richard.

Despite their lack of long-term commercial success, the band has frequently been cited as one of the frontrunners of the hard-rock influences inherent in 21st-century country.