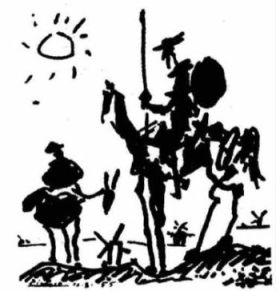 Don Quixote and Sancho Panza, sketched by Pablo Picasso
“En un lugar de la Mancha, de cuyo nombre no quiero acordarme, no ha mucho tiempo que vivía un hidalgo de los de lanza en astillero, adarga antigua, rocín flaco y galgo corredor.”
“In a place in La Mancha, the name of which I don't want to recall, there lived, not long ago, one of those gentlemen with a lance on the rack, an old shield, a worn-out horse, and a racing greyhound.”
Advertisement:

These are the very first lines of The Ingenious Gentleman Don Quixote of La Mancha (“El ingenioso hidalgo Don Quijote de la Mancha” in the original Spanish), often shortened to just Don Quixote. The novel was written by Spanish writer and satirist Miguel de Cervantes. Cervantes wrote the story in two parts, the first part published in 1605 and the second in 1615.

The story is that of an old hidalgo named Alonso Quijano, who is so obsessed with chivalric novels that he's lost a few screws and decided that he is a vagrant knight. Quijano renames himself as "Don Quixote de La Mancha" and decides to win eternal fame through the besting of criminals and general upholding of the Chivalric Code. Unfortunately for a lot of innocent people, his delusions make him pick fights with innocent bystanders, some of whom do not fight back because Don Quixote is obviously crazy. Of course, there are also strangers who are not so sympathetic. After one delivers a brutal beating to Don Quixote, a neighbor from his village meets the wounded Don Quixote and takes him home, where his friends and family burn the cursed books of chivalry and claim that A Wizard Did It (literally) to try to cure him. However, he soon returns to his delusion and journey. This time he manages to convince a simple farm-hand, Sancho Panza, to become his squire and sidekick for the promise of a governorship in the future. They experience many adventures, including the famous one where Don Quixote attacks some windmills thinking they are ferocious giants. note  The band They Might Be Giants was named after the film They Might Be Giants, which paralleled Don Quixote with the main character's delusions that he is Sherlock Holmes. At the end of the book, Don Quixote’s friends trick him by making him believe he is enchanted and take him back to his village.

Throughout the novel, Don Quixote never doubts, even for a moment, that the fictional adventures that he has read are real and that he really is a knight errant. Not even the petitions of his loved ones, the continuous ridicule of his peers, or the brutal beatings he suffers make him break his resolution: Don Quixote always continues trying to impose his quixotic (literally; he's the word's origin) beliefs on the world.

The first part of the novel was published in 1605, when stories of chivalry were pushing Condemned by History and Don Quixote's dreams of reviving chivalric ways were really a strange, misbegotten idea. However, Miguel de Cervantes had a clear distaste for them, in no small part because he was an ex-soldier who lost the mobility of his left arm in the Battle of Lepanto note  Cervantes was famously nicknamed "The One-Armed of Lepanto", or "el Manco de Lepanto" and spent several years in prison. Having had such harsh experiences, he found such idealistic stories completely absurd, and thought that they were too disconnected from reality. And out of such distaste, he decided to write this story to pick them apart and openly mock them.

The novel became a popular success (although that success was nothing unheard of compared to other contemporary titles, and it certainly wasn't a hit with Spanish critics of the day), and was reprinted several times in the next decade, even being translated into French and English. But most notable was the change in Spanish popular culture. Within a few months of its printing, virtually all of Spain knew about Don Quixote’s exploits: Memetic Mutations arose, chivalric romances became popular again, and even apocryphal "continuations" appeared. In the novel, Don Quixote mocks the tropes and cliches of these stories, yet leads an ironic revival of their traditions through his good nature and willingness to go challenge society's beliefs. Cervantes' story achieved the same thing in reality as in the story, while at the same time reinventing literature by creating the novel in its modern form.

Cervantes had promised a sequel at the end of Volume I and had begun writing it when he caught word of a spurious fake sequel to Don Quixote, written by an unknown writer with the pseudonym Avellaneda as a cash grab. This caused him to denounce the book in his own pages (somewhat ironically, this is the main reason anyone even remembers the imitator at all today) and motivated him to put out Vol II, the hidalgo's final adventure. The second part has a more serious tone, taking advantage of the change brought about by the first part of the book in Real Life, where Don Quixote has evolved from a Lord Error-Prone to an honest (but still insane) man whose noble attitude and delusions makes him the Butt-Monkey of a lot of people. Don Quixote has to confront his delusions (but only in the very last chapter), and the harshness of reality makes him realize that his naïve dreams were shallow, which brings him back to sanity before his death.

Don Quixote has been adapted to every medium, including illustrations by Gustave Doré. It's also been made into a couple of animated adaptations (one of them with Funny Animals) and even a Musical.

Don Quijote is commonly cited in literary criticism as "the first modern novel", and is probably among the most influential books of all time (just take a look at The Other Wiki's list

). It's also widely considered to be the best book ever written in the Spanish language, and nowadays almost every Spanish-speaking kid will have to read and study it in school at one point or another, similar to how every kid in the USA and UK must read and study Shakespeare (Cervantes' close contemporary).

is now named for Cervantes, and the planets (in increasing order of distance) are Dulcinea, Rocinante, Quijote, and Sancho.

Trope Namer for Windmill Crusader and The Dulcinea Effect.

open/close all folders
Some Adaptations

Red from Overly Sarcastic Productions, starts her episode on the titular character, by discussing how in modern times he's depicted as a misunderstood dreamer with a heart of gold, whose odd dreams are admirable and noble, whereas In the book, however, Don Quixote is anything but.

Red from Overly Sarcastic Productions, starts her episode on the titular character, by discussing how in modern times he's depicted as a misunderstood dreamer with a heart of gold, whose odd dreams are admirable and noble, whereas In the book, however, Don Quixote is anything but.