Literature / Dream of the Rood 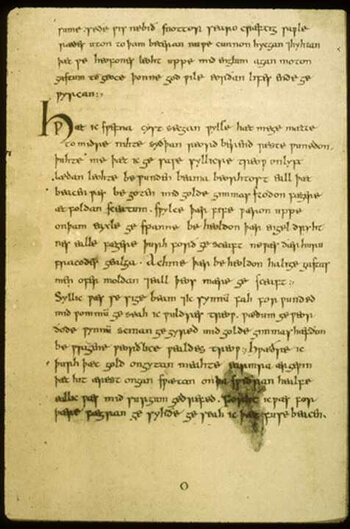 But he on rood that bleeding died,
Whose hands the nails did harshly smite,
Grant you may pass, when you are tried,
By innocence and not by right.
— Anonymous, "The Pearl", tr. J. R. R. Tolkien.
Advertisement:

One of the oldest (may have been written as early as in the 8th century) and most famous English poems (even though not exactly English), a description of a dream vision about the tree out of which was made the Christ's Cross. The tree, alternately glittering with gold and gems and streaming with blood, tells the story of the crucifixion of Christ, in which Christ is presented as an ideal of Anglo-Saxon warrior - beautiful, tough and courageous even in the face of death. The poem can be read as a literary fossil documenting the transitional stage from Germanic Pagan religion to full-fledged Christianity. J. R. R. Tolkien was certainly familiar with the text, as it is one of the most important samples for the Old English scholars, so it is interesting to note that it contains the word 'middangeard', a linguistic ancestor of 'Middle-Earth'.