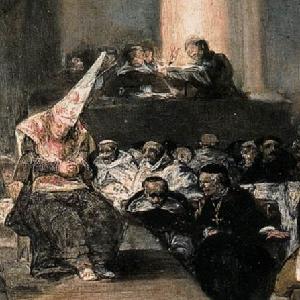 Bet he didn't expect that.
"The Inquisition, what a show
The Inquisition, here we go
We know you're wishing that we'd go away!
So c'mon you Moslems and you Jews
We got big news for all of yous
You better change your point of views today!
Cuz the Inquisition's here
And it's Here To Stay!"
— "The Inquisition", History of the World Part I
Advertisement:

The Spanish Inquisition (known among Spaniards as "the Holy Inquisition" or "la Santa Inquisición") was a State Sec of the Catholic Church in the Spanish Kingdom of Castile-Leon founded by Queen Isabella in 1478. It was later given jurisdiction over the Crown of Aragon (a union of the kingdoms of Aragon, Valencia, Majorca and the pricipality of Catalonia) and the Lordship of Navarra as well and eventuallynote  after the war of the Austrian Succession, in which Aragon and Navarra sided with the Austrian Habsburgs and were crushed the unified Kingdom of Spain. It was disbanded in 1834.

The Inquisition was founded by Isabella of Castile to stamp out heresy and enforce religious orthodoxy amongst her subjects, particularly in Granada — the not-quite-complete conquest and subjugation of which was used as something of a rallying point which she used to smooth over the cracks caused by the somewhat-unexpected union of the Spanish Kingdoms brought about by her marriage to Ferdinand, King of Aragon (whom we'll mention in passing just long enough to make it clear who wore the pants, though he did come in handy at times and by all accounts was a decent husband who could be trusted to get things done). Ferdinand and Isabella are still Spain's most popular historical monarchs.

Granada was the last remnant of the Muslim kingdom of Al-Andalus, which had once spanned nearly the entire Iberian peninsula. With its conquest, the Reconquista — the reclamation of Spain for Christianity — was complete. Shortly afterwards, the Muslim population of Spain was given a choice: convert to Christianity, or leave for North Africa. Many tens of thousands left, or were forcibly evicted. The Jewish population was later given the same choice. Isabella thought that it was only fair that those subjects who had effectively agreed to be loyal, Christian subjects would take a generation or so to learn the new ways. After that, the Inquisition could be used to educate the ethnically Moorish population about Catholic orthodoxy if need be. Until then, the Inquisition got started handling its standard fare of cases, the bread and butter it would chew on for the next three hundred years. That is to say, the Inquisition would tour around the cities and larger towns and address the issues that were generally the reserve of Ordinaries (church courts) everywhere — blasphemy, immorality, sexual immorality, and religious ignorance generally, and ignorance, illiteracy, corruption, and (sexual) immorality amongst the clergy.

By the end of the grace period, a significant minority of Moorish and Jewish subjects were Christian in name only, using 'conversion' as an excuse to stay on in Spain. The degree to which this minority bothered to maintain this illusion varied, but in some areas of central Granada, Church attendance could be measured by the dozens per annum, and ignorance of the basic tenets of Catholicism was rife. The Inquisition more or less gave up on ever addressing the huge numbers of Moorish and Jewish people living in the villages and hamlets of Granada and under the protection of Estate Lords who used them as cheap labour in Aragon. Lobbying instead for a further expulsion, they eventually got it a century on from the first expulsion and there was a second expulsion of all Moors from Granada. Most of those expelled went on to become urban poor in Spain's towns and cities, though those that could afford it generally went back to Moorish Africa. There was a third and final expulsion of all Moorish subjects from Castile-Leon after this, when it became clear that the Moorish minorities were not being assimilated and were in fact causing trouble in the locales they had migrated to.

The Inquisition's surveillance exclusively focused on people in urban centres, particularly people of prominence or importance — a strategy of limited resources more than anything else. The Inquisition was to some extent used as a political weapon by the Crown, which had few other means of dealing with its political enemies amongst the Clergy and the Civic Authorities, who administered over two-thirds of the urban population of Spain virtually independently from the Crown. To this end, cultural hang-overs like daily bathing (a Moorish custom) or not eating pork were (infamously) used as the basis for accusations of false conversion. In the same manner, the possession of certain texts — a list of banned books was eventually drawn up to this end — was used to support accusations of heresy, Protestantism and anti-monarchism. This had the effect of getting many relatively harmless intellectuals into trouble, but the Inquisition's role in preventing the outbreak of Protestantism in Spain has been called everything from 'marginal but useful' to 'critical and essential'.

Most of these people brought up on charges of heresy, heretical ideas and dangerous ideas, were asked to recant their sins and accept religious re-education. The afterlife and one's (subjects') place(s) in it being prized above all else — what's an earthly life of thirty years to eternity? — this was big stuff. The Inquisition witnessed very few witch trials; this is not just because they dealt only with a small proportion of the peninsula's (minority) urban population at intervals of decades or more — some towns for which there exist records were not visited more than a few times during the entire period of the Inquisition's existence — but because what trials there were ceased in the latter 16th Century.

The concept that the Inquisition burned witches, however, is a myth. The Inquisition ruled, at the time, that so-called witchcraft did not exist and that anyone claiming to possess "magical powers" was lying or insane. Actual self-professed "witches", who typically dealt in love philters, magic amulets and such, were seen as mere charlatans and punished accordingly, i.e. by whipping and public shame rather than burning. Historically, witch hunts were much more common in Protestant countries, and the Inquisition denounced them as backward and unorthodox — the Inquisition was not so much interested in enforcing 'old' Catholicism as it was in promoting the 'new' Catholicism of the Catholic Reformation or Counter-Reformation.

Unfortunately, this did not stop civic authorities — who had their own court systems independent of the Church and the Crown — and groups of angry villagers from rounding up 'witches' and hanging them anyway. Said authorities and mobs did not, sadly, keep records, so the actual number of Spanish people killed as witches remains unknown. That said, it is generally assumed to be lower than that in, say, France.

Another common misconception is that the Spanish Inquisition was deployed overseas — it was not. There are contemporary, sensationalist, rumours of the Spanish Inquisition burning people left, right, and center in the Netherlands during the course of the Reformation and Eighty Years' war. This was, however, the work of the Dutch Inquisition in the Spanish Netherlands, who were again in many cases using heresy as an excuse to deal with Dutch Nationalists and other politically troublesome individuals. It should also be pointed out that the Inquisition under Torquemada argued to save the books and documents taken in the Conquest of Mexico and South America, to sadly little avail.

Some points about the actual Spanish Inquisition:

Note the "Dunce Cap" being worn by the heretic in the picture. This was standard practice to identify the heretic on his/her way to the stake, and lived on as the "dunce's cap" of schoolroom legend — punishment for a classroom nonconformist.

The Spanish Inquisition in fiction: