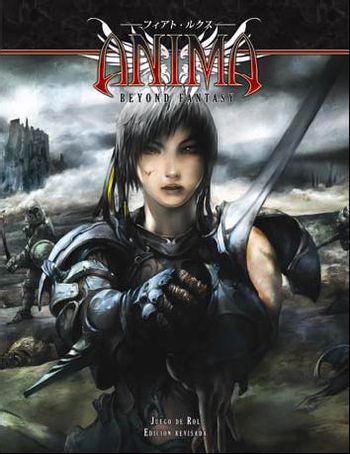 That's the only cover on the whole series not by Wen Yu-Li
In those times the World had another name. But everyone who knew it is gone.
Advertisement:

Anima: Beyond Fantasy is a Role-Playing Game first published in Spain in 2005. It's a fantasy game of Sword and Sorcery with strong anime influences. It's more rules-crunchy than rules-light, with emphasis in chi-abilities, magic, psychic powers and the like. It has been translated to English and French, the English version published by Fantasy Flight Games.

The intended setting for the game is Gaïa, who might, or might not, be a distant future Earth after a planetary scope Apocalypse How caused by a Reality-Breaking Paradox event. Its tone hovers between Seinen and Dark Shoujo Fantasy. Most of the art in the handbooks and signature characters are by Wen Yu-Li

, giving it a very distinctive and gorgeous look.

Set in the same world are the miniatures game (Anima Tactics), a (non-collectable) card game, and two video-games: Anima: Ark of Sinners and Anima: Gate of Memories.

Character Sheet for relevant NPC's in the Setting here. A constant WIP.

The game mechanics are heaviliy influenced by the old Rolemaster system by ICE, including the bulk of character classes being mostly a mix of basic ones (as in, Warrior meets Mentalist), or specialized versions of the same role (like Thief/Spy/Assassin). Character attributes may be rolled (on a D10) or bought with a point allotment. Character classes are pretty much just skill cost templates, and much customization can be done (although maybe not smart); still, nothing prevents your vanilla Warrior guy (known as Weapon Master) from getting a few Psychic powers, if you feel like it. The game uses mostly D100 rolls for checks, except for the odd D10 roll where Character attributes are involved.

Skill ranks, secondary attributes (like Hit Points) and special combat tricks like Martial Arts or fighting techniques are bought with Development Points, D.P.s for short. Special advantages and training are bought with Background points. In fact, being a psychic or spellcaster is NOT a part of the class choice, but one of these advantages.

The system is level-based, with a possible "Apprentice level 0" and a (soft) level cap of 20. Levels add some inherent bonuses to skills and characteristics coming from the class, but mostly they give you extra D.P.s to spend.

Supernatural powers all have their particular mechanics:

Combat is fairly lethal. Thankfully, the myriad weapon tables used in Rolemaster are gone, although fast adding and substracting is still a plus. Fights between opponents a couple of levels apart are very uneven affairs; high level characters with supernatural powers can annihilate armies without breaking a sweat. Later Sourcebooks even feature rules for enviromental damage caused by Physical Gods duking it out and combats where time is stretched by the Rule of Cool.

In spite of this, it is suggested that the game should be played at a "low" power level, severely limiting the availability of Supernatural skills, yet other two power level settings are suggested, and the "high power level" one uses the default Supernatural mechanics and character creation on the rulebook.

Anima: Beyond Fantasy contains examples of the following tropes

Gaïa, the World Setting, contains examples of the following tropes