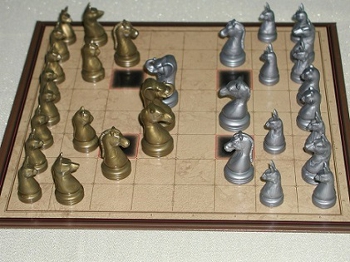 Arimaa is a chess variant in which two groups of animals attempt to shove each other around and throw each other into pits in an effort to get their bunny rabbits safety across the field. Way better than it sounds.

The game was designed by computer programmer Omar Syed, who created it because he was disappointed by the dominance of computers over humans in modern chess play. He designed Arimaa to be similar to chess, using the same physical equipment, but making it harder for computers to solve while still being intuitively simple and interesting for humans. Syed created a contest along with the game, with a $10,000 prize, in which he challenges people to make such an AI that actually can beat the top players. It took 12 attempts, one each year, for the computers to finally win in 2015

The pieces represent different animals of varying levels of strength. These pieces on each side are (in order of descending power): the Elephant, the Camel, two Horses, two Dogs, two Cats, and eight Rabbits.

Arimaa can be played online at the official website here