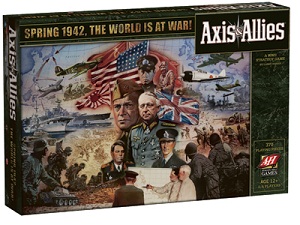 Axis & Allies is a tabletop wargame designed in 1981 by Larry Harris and published by Nova Entertainment. A second edition, essentially identical to the first (and now titled Axis & Allies Classic) was published in 1984 by Milton Bradley, and was a smash hit. In 2003, a third edition was published by Avalon Hill, who have also published a number of variants, such as a version based on the First World War. Over the years, Axis & Allies has enjoyed immense popularity, with over 2 million copies printed.

The game has spawned an unofficial digital version known as Triple A: Axis And Allies.