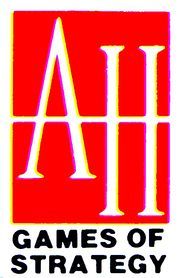 "Classic" logo from their years of peak success.
Advertisement:

Avalon Hill is a board game company famous for its pioneering wargames. Founded in the mid-twentieth century (less than a decade after the end of WWII), they were one of the first companies to have much success marketing board games for adults. Their first game, Tactics, is generally considered the first commercially successful wargame. While they were not only a wargame company, it was wargames which made their reputation. They introduced innovative techniques like the hex grid board, and zones of control, and they soon became famous for their elaborate and complex rules—many of their games took days to play. Within a couple of decades, the terms "serious gamer" and "Avalon Hill fan" had become nearly synonymous. They cemented this by buying the rights to the extremely popular abstract wargame, Diplomacy.

In the 1970s, they began branching out more seriously, when their then-parent company Monarch also acquired 3M Games. Some older, well-established games like Acquire and TwixT were released under the AH brand, which helped the company move into new markets. The company went from dominating a niche to being a major player in tabletop games in general. By the early 1980s, they were experimenting with the new fields of video games and role-playing games. Also during the 1980's, the company started a subsidiary, Victory Games, which was staffed mainly by former employees of its rival Simulations Publications Inc. (SPI), which had run into financial troubles and been bought out by TSR. Victory Games, or VG, put out a string of games during the 1980's and early 1990's, such as The Civil War, NATO, Gulf Strike, Across Five Aprils, The Korean War and Hell's Highway, which are regarded nowadays as some of the best games ever to be produced in the hobby. VG also produced, under license, the official James Bond role-playing game.

They also published a fairly successful gaming magazine, The General.

In the 1990s, though, financial struggles led to the company's purchase by Hasbro, who eventually placed them under its Wizards of the Coast division, which continues to release games under the brand.

Avalon Hill games with a page on this wiki:

Tropes in their other works: