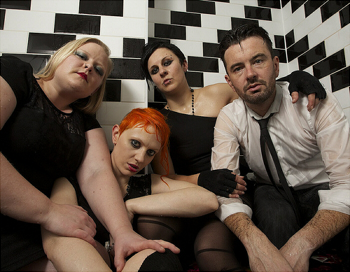 From right to left: Keely, Mishkin, Katha and Garry
Birdeatsbaby is a genre indefinable quartet formed in 2008 and based in Brighton. The dark and twisted quality of their music videos has gained them some degree of fame. Just like that other dark cabaret band, they present a lot of piano lead poptunes, supplemented with drums, guitar, and violin.Singer and pianist Mishkin Fitzgerald has also released a solo album, and works in electro-math-rock band Cat Fire Radio.
Advertisement: