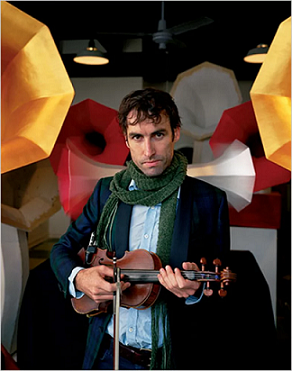 Andrew Wegman Bird (born July 11, 1973) is an American singer-songwriter, multi-instrumentalist, and whistler originally from Chicago. Bird's career started off when he joined swing revival band the Squirrel Nut Zippers, then later led his own jazz/folk band, Andrew Bird's Bowl of Fire, before becoming a solo artist. His 2005 release The Mysterious Production of Eggs firmly entrenched him in the indie-sphere.

Nowadays, Bird is mostly known for his violin, his cryptic and witty lyrics filled with scientific references and wordplay, and his whistling. He's very prolific, having released 13 studio albums as well as plenty more EPs, instrumental projects, and live albums. He has collaborated with Fiona Apple, Matt Berninger, and St. Vincent, among many others.

Tropes associated with Andrew Bird and his music include: