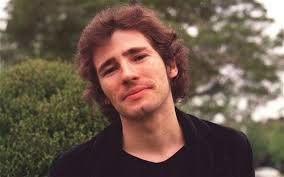 Timothy Charles Buckley III (February 14, 1947 – June 29, 1975) was an American folk, jazz and avant-garde singer-songwriter born in Washington, D.C.. Aside from his music, he is perhaps best known as the father of Jeff Buckley — who, like his father, was a very talented singer who died prematurely.

As a child in California, Buckley was steeped in classic jazz such as Frank Sinatra and Billie Holiday as well as country like Johnny Cash and Hank Williams. In high school, he was popular and athletic before he started to cut class and became a Rebellious Spirit, focused on music.

In 1965, he got married to Mary Guilbert, dropped out of Fullerton College after two weeks and pursued a music career in LA. He was signed to Elektra Records, the label that would later sign The Doors, and recorded a folk-rock album, ''Tim Buckley'', in August 1966. A few months later, he divorced his wife, who was pregnant at the time with their son, Jeff.

In 1967, at just 20 years old, he released an album that was judged to be very ambitious, Goodbye and Hello, which featured both introspective, personal folk songs and anti-war material. Subsequently, he signed with Frank Zappa's Straight Records, and later with another Zappa label, Disc Reet. Buckley's 1968 Happy Sad, which was his greatest commercial success, was similarly eclectic. Buckley evolved constantly over the course of his career, starting from the more heavily orchestrated folk-jazz sound of his first few albums and moving towards a more minimalist sound.

His subsequent three albums, Lorca, Blue Afternoon, and Starsailor, were a departure from folk rock and alienated his fans, especially the lattermost album, which featured free-jazz influences and his most extreme vocal performances yet. Then Buckley fired his band and cut three albums in a completely different genre which he called "sex-funk": Greetings from L.A., Sefronia, and Look at the Fool.

In 1975, Buckley got clean and began touring again, only to die of a drug overdose after a concert in Santa Monica at age 28.

Do not confuse him with the Tim Buckley who draws Ctrl+Alt+Del.