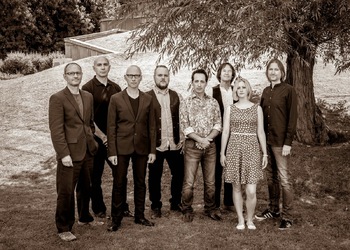 Big Big Train is an English Progressive Rock band formed in 1990, and still active. Founded as a studio-based project releasing independent albums, since the late '90s they have become a more traditional touring band with a stable line-up.

The group specializes in epic, often album-length celebrations of English history and culture, from bucolic nostalgia to Steampunk and Diesel Punk. Their music manages to stay highly melodic and complex at the same time, and has slowly incorporated more and more classical instrumentation over the years.

The group was formed in Bournemouth by then-guitarist Greg Spawton and then-bassist Andy Poole (the two would later trade instruments), who employed a series of singers and guest musicians to fill out their songs. Since their breakthrough 2007 album The Difference Machine, Big Big Train’s popularity and album sales have steadily increased among prog fans on both sides of the Atlantic.