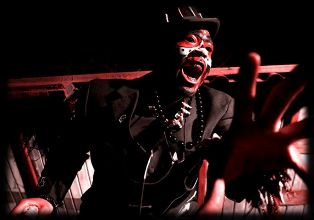 Big Hoodoo is a rapper from Detroit signed to Psychopathic Records. Also known as Doe Dubbla and The Jinx, whose stage persona contains copious amounts of Hollywood Voodoo and West African Black Magic. His appearance is heavily inspired by Baron Samedi, one of the Loa of Haitian Voodoo. However, due to the crossover between Insane Clown Posse's fanbase and Professional Wrestling fans, many Juggalos have compared Big Hoodoo to Papa Shango, whose appearance was also inspired by Baron Samedi's.

Big Hoodoo's lyrical style can be broadly described as Horrorcore, with elements of Type 3 Gangsta Rap, with Hoodoo using horror fantasy as a metaphor for the Wretched Hive of inner city street life, and as a form of escapism.

Big Hoodoo and his music provides examples of: