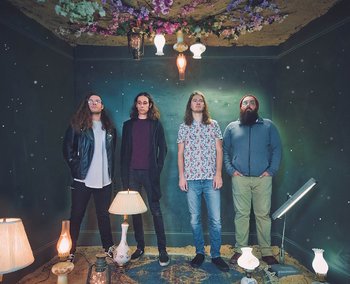 Astronoid are a band from Lowell, Massachusetts, coming to fruition in 2012. With a mix of post-metal, progressive rock, blackgaze, dream-pop, and thrash metal, they have put together melodic, highly uplifting music that some have described as "dream thrash." Beginning as a project in the studio between the vocalist & guitarist, and the bassist, they started with a sound that could be compared to Devin Townsend, Alcest, Deafheaven, Emperor, The Mars Volta, and many others. They would go on to release two E Ps, November & Stargazer. After signing on to the Blood Music label, the band would go on to release their debut LP Air in 2016. Often considered "happy black & thrash metal", their music is highly uplifting, thanks to utilizing melodic guitar notes and the vocalist's soaring, dreamy singing voice. There are no screamed vocals, and the band designs their sound to please the listener in a positive light. Mike De Mellia, one of three guitarists for Astronoid, left the band to pursue other creative interests, as announced in October of 2018. After extensive touring with Ghost Bath, Animals as Leaders, and others, the band discretely hit the studio and recorded their sophomore self-titled album, to be released on February 1st, 2019. A music video was announced and released in November, 2018, for their first single, "I Dream in Lines."