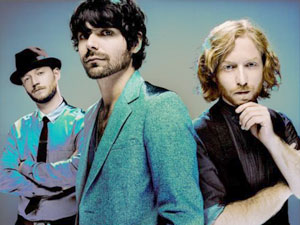 "Hello, we're Biffy fucking Clyro."
— Simon Neil, every show
Biffy Clyro.
Biffy Clyro are a Scottish rock band from Kilmarnock, formed in 1995. After their first three albums, the band expanded their following significantly with the release of their fourth, Puzzle, in 2007, which went gold in the UK. Biffy Clyro's popularity was built upon further in 2008 and 2009 with the release of the singles "Mountains" and "That Golden Rule".

Their best known album, Only Revolutions, reached #3 in the UK chart and went gold within days of its release in 2009, later going platinum in 2010 and was nominated for the Mercury Music Prize. In December 2010 they were especially brought to notice of mainstream after their song "Many of Horror" was covered as the winner's single in The X Factor by Matt Cardle.

The band consists of: