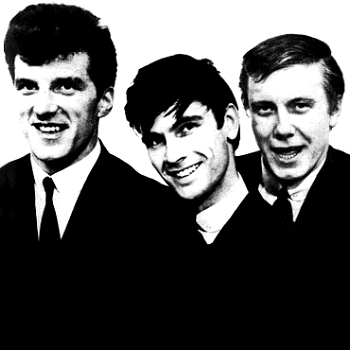 The Big Three (1961-1964, 1973) was a beat, rhythm and blues, and rock and roll group from Liverpool, England. Their Power Trio format (as implied by their name), along with their energetic and blistering live performances and unprecedented levels of general loudness, made them one of the most popular and respected acts of the Merseybeat scene (second only to the inevitable Beatles) at their peak of popularity.

Unfortunately, they were unable to parlay their live sound into a successful recording career, not at all helped by manager Brian Epstein's (also The Beatles' manager) attempts to clean up their act and sound as he had done with The Beatles, much to The Big Three's consternation. Audiences were baffled by their poppy single releases, which were not at all indicative of their live sound. The only release considered to do the group justice was a live EP recorded at the infamous Cavern Club, where the Three were a mainstay.

Commercial failure, coupled with personal problems and group tensions, caused the ultimate dissolution of The Big Three, rendering them basically a huge What Could Have Been and little more than a footnote to other, more commercially successful, artists of the same era. Ten years later, two former members reformed The Big Three and recorded a 1973 LP, aptly titled Resurrection.

Tropes associated with The Big Three: