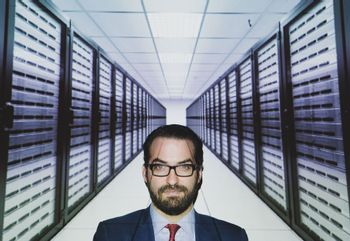 "You understand, they got a plan for us, I bet you didn't know that I was dangerous."
Big Data is an American Alternative Dance project by Harvard grad and music producer Alan Wilkis. Essentially, he considers himself Properly Paranoid about the growing influence of technology in daily life. In his own words: "Big Data

is a paranoid electronic music project from the Internet, formed out of a general mistrust for technology and The Cloud (despite a growing dependence upon them)."
Advertisement:

He has collaborated with many other artists, such as Kimbra and Rivers Cuomo. One of these collaborations, Dangerous (ft. Joywave), made #1 on the Billboard Alternative List in August 2013.