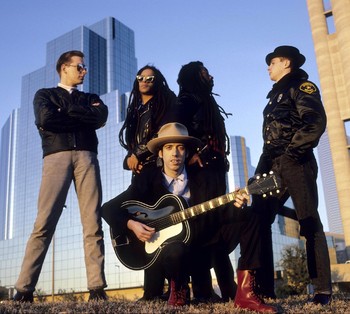 "I ain't with the hundred crowd, I'm with the 99."
Big Audio Dynamite, also known as Big Audio Dynamite II and Big Audio, as well as B.A.D for short, is a British Alternative Dance and Post-Punk band formed in London in 1984 by former Clash guitarist Mick Jones. The band is known for its eclectic mix of musical styles much like The Clash before them, experimenting with Post-Punk, Hip-Hop, Reggae, Funk and Punk Rock, becoming one of the Trope Makers for Alternative Dance in the process, along with acts such as New Order. After releasing several albums, regularly touring and experiencing many lineup changes, B.A.D finally ceased activity in 1997, although the original 1984-1990 lineup reformed for a tour in 2011.
Advertisement:

The following tropes are present in Big Audio Dynamite's work: