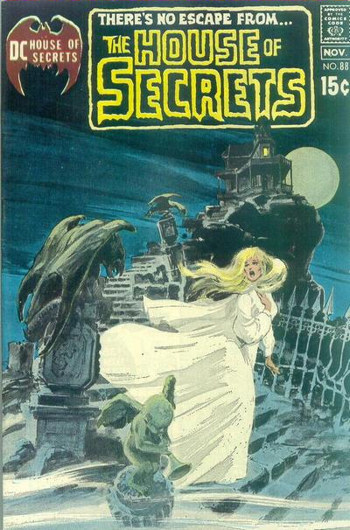 "You best start believing in ghost stories, Miss Turner. You're in one!"
— Captain Hector Barbossa, Pirates of the Caribbean: The Curse of the Black Pearl
Advertisement:

A heroine haunted equally by her own past and the uncanny events around her.

This character continually pops up in films involving ghosts or supernatural characters. She moves into Haunted Headquarters without any idea of what's in store for her. She seems attractive, capable and altogether normal until...the strange noises from the attic keep waking her up. Or that Creepy Housekeeper keeps making cryptic comments. Or her kid starts going on about some Imaginary Friend who might not be so imaginary after all. The Haunted Heroine typically comes equipped with a kid (or younger sibling) that is inevitably the first one to notice the supernatural goings-on, possibly because kids are supposed to have more imagination. It won't take long however, before the woman realizes she's being haunted.

Now the fun begins as the Haunted Heroine sheds her well-groomed exterior to reveal the barely-concealed neuroses and phobias hidden underneath. This character tends to have a Mysterious Past and hinted-at childhood trauma. She might be sexually repressed or traumatized too. Whatever her problems, there's always the subtle suggestion that she herself might be imagining the whole thing because of her messed-up psyche. Freud would have loved the Haunted Heroine. It doesn't help that nobody ever seems to believe her story. As the story continues, expect to see hints of Mama Bear in her as well when her kid or kids are threatened.

The originator of this trope is Henry James' The Turn of the Screw, in which a governess becomes convinced that her dead predecessor and her lover have somehow come back from beyond the grave to mess with the kids. This famous and influential story set the tone for a slew of Supernatural Fiction ever since that tries to imply it might be All in Their Minds. All this while still having a lot of fun with the ghosts.

Compare and contrast with Supernatural-Proof Father. See also Haunted House Historian, who typically warns the Haunted Heroine and gets ignored for their trouble.