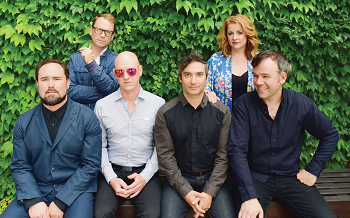 "When there's nothing left to burn, you have to set yourself on fire."
— "Your Ex-Lover Is Dead"
Advertisement:

Stars is an indie-rock/pop band from Montreal, Canada. They became active in 2000 with their first album Nightsongs and have released seven more since.

Not to be confused with the Australian band of the same name, or with the 1991 album by
Advertisement:
Simply Red.