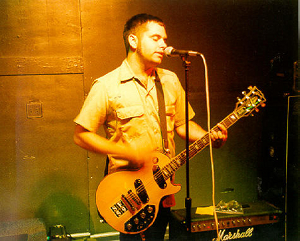 "I never thought that / we'd ever go far / like all my friends who played guitar."
Alternative music doesn't exist. Shoegazer music has been dead since 1991. The only shoegaze music we ever did is maybe "The Zenith" from Silver—even that wasn't current when it came out. Now, I hear bands that are doing what I tried to do four years ago—stuff that wasn't current even at that time. Like the Bible says, "There is nothing new under the sun," especially in Christian music. I just want to be a decent songwriter, not a follower.
— Jason Martin, The Blue Star Journal

Starflyer 59 is an Alternative Rock "band" from Riverside, California. Jason Martin is the guitarist, vocalist, keyboardist, songwriter, producer, and only permanent member.

Jason is a Christian; although faith doesn't come up often in his songs (on many albums, the only indication of his beliefs is a single-sentence dedication to "Jesus Christ our Lord and Savior" in the liner notes) he has no problem self-identifying as Christian Rock. He doesn't believe there's any real difference between "a Christian band" and "Christians in a band".

Mister Martin's musical career began with his brother Ronnie's techno band (which performed under a variety of names, but ultimately recorded under the moniker Dance House Children). Wanting to do something different, something with guitars, Jason recorded some demos on his own and gave these to Brandon Ebel, who signed Jason to his fledgeling label, Tooth & Nail Records. Jason recruited bandmates from his circle of blue-collar, Southern-California-dwelling, Britpop-listening friends, and Starflyer 59 was born.

(Ronnie Martin, meanwhile, went down his own path, and retooled Dance House Children into the one-man synth-pop band Joy Electric, and was every bit as prolific as his little brother.)

The debut album, Silver, was reverb- and distortion-drenched pop-rock—either one of the final albums of Shoegazing's first wave, or one of the first post-Shoegazing albums. Sf 59's subsequent albums leaned more towards lounge (Gold) and hard rock (Americana), but the shoegaze label stuck, despite Jason's reluctance.note See the page quote. Also, J. Edward Keyes has noted that Jason's default reaction to the unavoidable My Bloody Valentine comparisons was a dismissive, "We're not nearly as brilliant as they were." After those three albums (and some songs intended for a fourth album that were ultimately shelved), Jason decided that he'd finished saying everything he wanted to say with guitar distortion, so it was time to do something different.

Under the influence of the producer and keyboardist Gene "Eugene" Andrusco, Starflyer made an abrupt Genre Shift to a lighter, New Wave-influenced sound with undistorted guitars and melodic keyboards. Fans and critics were surprisingly receptive to the New Sound Album The Fashion Focus and its even lighter followup Everybody Makes Mistakes. Then, in 2000, Gene Eugene died.

Jason Martin pressed on, recording a series of albums which all employed wall-of-sound production in different ways. 2001's Leave Here a Stranger evolved the prior albums' pop into a synth-orchestrated Baroque Pop tribute to Pet Sounds. 2003's Old was an energetic, effects-drenched mix of Space Rock and Dream Pop. 2004's I Am the Portuguese Blues was a weird throwback—the shelved post-Americana demos re-recorded as Up to Eleven blues-rock. 2005's Talking Voice vs. Singing Voice was a mellower follow-up to Old, backed by a live string trio.

The production was finally dialed back to Gene Eugene-era levels for My Island, while the speed was cranked up. Subsequent albums Dial M and The Changing of the Guard continued in the same vein, while adding acoustic guitars and Synth-Pop influences (simultaneously) to the mix.

Beginning in 2005 or so, Jason's family ties made it increasingly difficult to go on tour. The last live show was played in 2008, and Starflyer is now a purely studio band. In an interview with a fan website, Jason Martin was asked about the future and replied that his plan was originally to put out 20 albums and then retire.

In 2011, Starflyer 59 parted ways with Tooth & Nail Records. They continued making music, and released their 13th album (and first completely independent album), IAMACEO, in January 2013. The separation was short-lived, however: Jason returned to T&N for the 2016 album Slow.

As a sign of just how important Starflyer was to Tooth & Nail Records' success, the 2014 documentary about the label's history was named No New Kinda Story, after the Sf59 song.

Discography
Side projects
Bon Voyage is almost but not quite Starflyer with female vocals; the Dream Pop yin to Starflyer's shoegaze yang. Then they switched to synth pop with their third album. Jason writes the songs and plays guitar, and his wife Julie sings.

Nova Satori was an instrumental band led by Josh Dooley, and basically a prototype for his main band, Map. Jason played drums for them.

The Brothers Martin saw Jason reunite with his brother Ronnie for the first time since the Dance House Children days. Both brothers' love for New Wave Music resulted in their collaborative album attempting to out-80's the 80's themselves. Now that Ronnie has relocated to Ohio, a follow-up album is very unlikely.

Neon Horse / White Lighter: Neon Horse was an Anonymous Band playing a mix of hard rock and synth-pop. Fans were quick to speculate that it was a collaboration between Mark Salomon (lead singer of The Crucified and Stavesacre) and Jason Martin. Copyright records, and Neon Horse's sole live show, confirmed this to be true (and revealed that Stephen Dail was the bassist). After two albums, Salomon put the horse out to pasture, but his next band, White Lighter turned out to be a Spiritual Successor. Jason Martin, though not formally a member of White Lighter, is still involved as the producer and keyboardist.

Low & Behold is a Goth Rock / darkwave band, with Ryan Clark from Demon Hunter on vocals.

Lo Tom is a collaboration with Dave Bazan (formerly of Pedro the Lion), T.W. Walsh, and Trey Many. Their debut album was several years (and name changes) in the making. Allegedly they're already working on a followup.

"All praise and glory to Jesus Christ our Lord and Savior. This has been a Blue Collar Production."