Film / The Crow: City of Angels 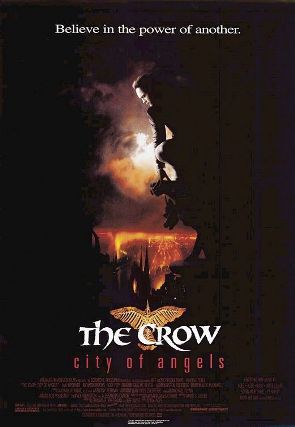 "If two people really love each other, nothing can keep them apart."
Advertisement:

A 1996 film, the sequel to the The Crow, written by David S. Goyer and directed by Tim Pope.

Set in the near future, the plot follows the same beats as the first film, but with a new protagonist and villains. Motorcycle mechanic Ashe Corven (Vincent Perez) and his son Danny are murdered after they witness a gangland killing in the wrong neighborhood. Ashe rises from the grave to extract vengeance against the motley assortment of thugs who killed him, which brings him into conflict with the local crime lord Judah (Richard Brooks) and his mystic adviser Sibyl. The character of Sarah is now an adult and uses her experience with Eric Draven to help guide Ashe on his rampage against the villains.

It was also notable for featuring Mighty Morphin' Power Rangers star Thuy Trang as the villainous Kali, in what would be her final role before her tragic death in 2001.