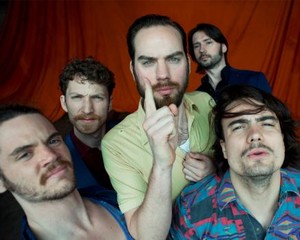 De Staat are a Dutch Alternative Rock band from Nijmegen. On their first album, almost all the instruments and vocals were done by frontman Torre Florim. The band was expanded for live shows and the following albums. Their music is inspired by Queens of the Stone Age (Torre has said that he's a huge Josh Homme fan).

At the end of 2015 the band started gaining some international notoriety when they released the official clip for the song "Witch Doctor" off their third album I_CON. The clip features Florim standing in the middle of a circle pit consisting of hundred motion-captured men. It went viral as soon as it was released and even got a shout out from Tommey Lee, the drummer of Mötley Crüe, on his Facebook-page. The band quickly followed that up with the release of their fourth full length album O. The album gave them more international attention, including that of Muse, who let the band be their supporting act for fourteen arena shows in Europe.

The band and their music contains examples of: