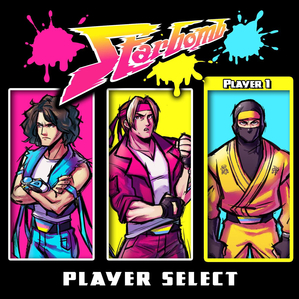 Starbomb was a comedy/rap supergroup formed in 2013 by comedy duo Ninja Sex Party (Leigh Daniel "Danny Sexbang" Avidan and Brian "Ninja Brian" Wecht) with the addition of Arin "Egoraptor" Hanson. (All three members are also members of the web show Game Grumps; Danny and Arin are co-hosts.) They later added the Canadian group Tupper Ware Remix Party (better known as TWRP) as their backing band in 2015; they also became the backing band of NSP in the same year.

Their music revolved around parodies of Nintendo titles and other popular video game franchises, such as The Legend of Zelda, Super Mario Bros., Sonic the Hedgehog, Castlevania, and Final Fantasy. Songs often consisted of franchise characters being placed in crass, surreal, realistic, and generally humorous scenarios.

They released three albums — Starbomb in 2013, Player Select in 2014, and The Tryforce in 2019. The lattermost album notably contained statements in several tracks that it was potentially the final Starbomb album; in a 2021 Q&A, Wecht responded to a question asking if this was really so with "Probably." Two days later, Avidan confirmed on an episode of Game Grumps that the band had "essentially finish[ed] its run".

to celebrate the release of Player Select.

Funny song about the Trope Namer, animated by Andiemations.

Example of:
Samus Is a Girl

Funny song about the Trope Namer, animated by Andiemations.