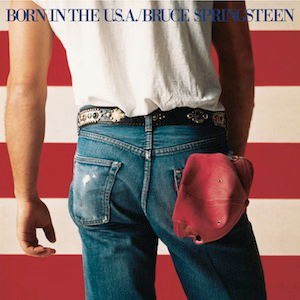 You end up like a dog that's been beat too much
'Til you spend half your life just coverin' up
I was eight years old and running with a dime in my hand
Into the bus stop to pick up a paper for my old man
I'd sit on his lap in that big old Buick and steer as we drove through town
He'd tousle my hair and say son take a good look around
—"My Hometown"
Advertisement:

Born in the U.S.A. is the seventh studio album by American Rock & Roll singer/songwriter Bruce Springsteen. It was released by Columbia Records on June 4, 1984.

Bruce started working on this album while recording Nebraska. He was looking for a sound that was more accessible to the mainstream, while still carrying his message. He and the E Street Band released a preliminary nameless mix tape in 1982 which featured many of the songs that would appear on this album. A few of the songs would not make it, including "Murder Incorporated", which wouldn't see release until 1995.

A second mix tape release was made in July 1983. That tape included "Pink Cadillac", which also would not make the cut.

The final track set was solidified in May 1984, and released the next month with 12 songs, seven of which would become singles: "Dancing in the Dark" ("Pink Cadillac" became its B-side), "Cover Me", the Title Track, "I'm on Fire", "Glory Days", "I'm Goin' Down", and "My Hometown".

It is said that, all told, more than 80 songs were recorded in total during the sessions that produced this album and Nebraska. At one point, Bruce considered combining the two into one double album.

Ironically, the title track, which was a lamentation of the plight of Vietnam veterans, became a patriotic anthem for many. He had to expressly forbid Ronald Reagan from using it for his 1984 re-election campaign. Bruce was never happy about that. Realizing the Sarcasm Failure, he would make a point of playing the song far less bombastically than it was originally recorded whenever he played it on tour.

Bruce went on a 156-show world tour to promote the album from July 1984 through October 1985. During the tour, he promoted all the songs from this album and from Nebraska. Four of his performances on the tour are in Bruce's archives. It was the fifth-highest-grossing concert tour of the 1980s.

On a more trivial note, the album holds the distinction of being the very first to be pressed onto a Compact Disc in the United States, through Sony's Digital Audio Disc Corporation. The exact discs pressed were never commercially released, having mainly been made simply as a promotional stunt for the factory. After all, what better way to kickstart American involvement in CD manufacturing than with an album called Born in the U.S.A.? The master from this release would be repurposed for the album's actual commercial debut on the format though.

"This gun's for hire, even if we're just troping in the dark":