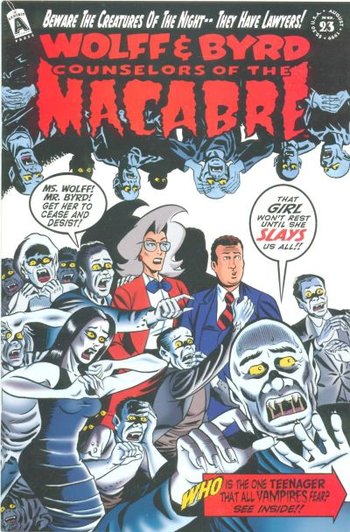 "To you, these monsters are just evil beings to be vanquished.
I'm the one standing there when they die...
and become the men they once were."
— Gabriel Van Helsing, Van Helsing
Advertisement:

On one end, we have the Hunter of Monsters, the man who stalks the night, armed to the teeth, ready to mow down vampires, zombies, werewolves, or vampiric zombie werewolves. And on the other end, we have the Friendly Neighborhood Vampires. The guys and girls who keep a nocturnal schedule, stop over at the blood bank for a quick snack, and do their best to help the community.

There are going to be some interesting philosophical questions when these two meet. (Or not.)

Van Helsing Hate Crimes are what happen when a medium that includes monsters and/or monster hunters calls attention to the fact that, in that 'verse at least, not all monsters are, well...monsters. Some of them are perfectly decent folks trying to fit in who happen to get lumped in with the one or two bad apples, like Dracula. Of course, this will result in the monster hunters either learning An Aesop or turning out to be those who fight monsters in the truest Nietzschean sense, sometimes becoming even worse than the actual monsters. If there are both good and bad monsters within this universe, expect these hunters to be far more competent at attacking the good ones.

Compare Fantastic Racism, which is similar to this but on a more wide-spread, societal scale, and may also be targeted at creatures that are not obviously monstrous (such as elves, talking animals or whatever). Also compare Zombie Advocate, who argues in favor of the monster's humanity, and Inhumanable Alien Rights, when the hunter is from a government agency of some kind. See also Stages of Monster Grief, for monsters who may or may not like their condition. See also Burn the Witch!.

Not to be confused with what happens when Van Helsing turns Lawful Neutral or Lawful Evil.